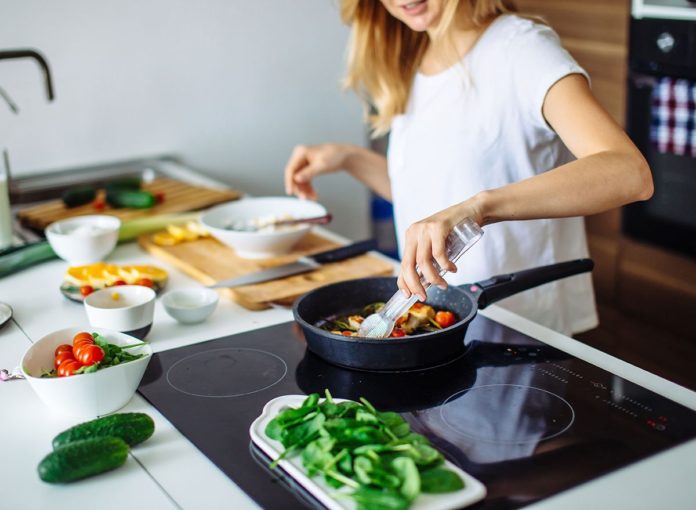 What Not to Cook in a Cast-Iron Skillet

I have an embarrassing confession: I used to use my cast-iron cookware to make almost all of my food. Occasionally some dishes would have a metallic taste, but I had no idea why. Apparently forgetting that the internet existed, I let this go on for years without looking in to the reason. I idly wondered if I wasn’t properly caring for the pan, or if there was something wrong with it.

It was only after I brought the problem up in a meeting at Epi that I learned the reason: you’re not supposed to cook acidic food in cast-iron pans. Suddenly, I saw the pattern I had been totally oblivious to before. It was only when I made tomato-based recipes, or poured vinegar into my skillet, or added lemon juice that this would happen. In my defense, I loved my cast-iron pan and wanted to use it for everything. And it’s true that it’s a kitchen workhouse, especially when it’s properly cared for. But to help you avoid my mistake, here are some tips about what not to cook in cast-iron cookware:

As mentioned above, this was my central mistake. I would stew tomato sauces in my cast-iron Dutch oven for prolonged periods, deglaze my skillet with a pop of vinegar, or add lemon juice to foods while they were still hot on the skillet. You should avoid cooking acidic sauces in cast-iron pans for two reasons: first, the acid loosens trace amounts of molecules from the metal that can then leach into your foods, imparting a metallic flavor. While perfectly safe to consume, these metal flavors can be unpleasant. (The good news is that America’s Test Kitchen found after tasting tomato sauce at 15-minute increments while it stewed in a cast-iron skillet that the metallic flavor only started to come through after 30 minutes of cooking.)

The second reason is that acid can cause the seasoning on a cast-iron pan to break down. The seasoned coating on a cast-iron pan is the layer of polymerized fat that comes from heating fat on the pan’s surface, and it can eventually make the pan naturally nonstick. To preserve it, avoid cooking acidic foods in your cast-iron pan for longer than a few minutes, or letting acidic foods sit in the pan for a while after cooking. Just finishing pan-fried chicken cutlets with a spritz of lemon juice? Should be fine. But if you’re making a slow-simmered Sunday sauce or bolognese, use an enamel-lined Dutch oven instead of your cast-iron skillet.

2. Be Aware that a Cast-Iron Surface Takes on Flavors

A cast-iron pan, especially when it’s straight out of the box and hasn’t been through several rounds of seasoning, has a porous surface that will take on flavor. Even a really well-seasoned pan is more apt to take on flavor than a stainless steel or nonstick pan, especially since we don’t recommend cleaning a nonstick skillet with soap for risk of stripping the seasoning. For this reason, you’ll want to think twice about making that skillet cookie directly after the salmon from last night’s dinner. If you plan on making a lot of desserts in your cast-iron skillet, it might be smart to buy a separate skillet for them. After all, cast-iron skillets are cheap!

Cast-iron skillets are beloved for their ability to retain heat—all the better for getting that perfect browned crust on a steak. But this same asset is a liability when it comes to more delicate meats that won’t stand up to heat as well. Flaky white fish like flounder or tilapia are at risk of falling apart and not flipping well when cooked in cast iron. Even with heartier fish like salmon, the skin is likely to stick to the cast-iron surface, making flipping difficult. Instead, cook your fish in a stainless-steel nonstick skillet.

4. Before Your Skillet Is Well-Seasoned, Avoid Sticky Foods

For the first few months that you own a cast-iron skillet (or longer, if you don’t use it much) you should avoid cooking foods that are prone to sticking. A French omelet, scrambled eggs, pancakes, and fried rice are all foods that might work well on a shiny, extremely well-seasoned pan, but will likely stick to a newer pan that hasn’t been used much. Not only will you over-brown your eggs and have funky-shaped pancakes, but you’ll also have to scrub—and, possibly, soap—the skillet to get it clean again, which will strip away the pan’s seasoning.

For the first few months of cooking on your skillet, you’ll want to set yourself up for success. Cook a lot of steaks and bacon in your new skillet. The fat from these foods will help enhance the coating of hardened fat on the skillet. Eventually, after it has been used to cook fattier foods and washed and cared for properly, your pan’s surface will become slicker and more nonstick, and will be able to handle foods like pancakes and eggs.

5. And, Whatever You Cook, Avoid Storing Food in Your Cast-Iron Pan

With a cast-iron skillet, you should always remove food from the pan and store leftovers separately. (No sticking tin foil over a pan of food and just popping it in the fridge.) As a general rule, you want to keep your cast-iron pan very dry to preserve its seasoning and prevent rust. The acids in food left in the pan will break down the seasoning, plus storing food in the pan for prolonged periods makes it more likely to impart metallic flavor.

Also: who has room in their fridge for a cast-iron pan anyway? We sure don’t. Plus, we’re going to need that pan to cook our next meal.

Many people are familiarized with 12-step programs like AA. They assist people suffering from...
Read more
Cooking